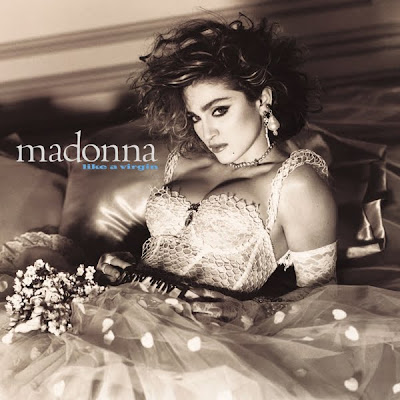 All of Madonna's '80s output is well regarded, but Like a Virgin gets the least amount of love among the four albums. Madonna has been riding a retro popularity wave for being most like the '80s sound that's currently en vogue, Like a Prayer is generally regarded as one of her best albums of any era and True Blue is considered better by comparison. But Like a Virgin should not be disregarded, for I find it offers up a lot of charm.

It certainly has a special place in my heart and historically, it's probably Madonna's most important album, since it's the one that made her a superstar. Madonna was a hit, but not a megahit, producing a couple of top 10 hits. That's on par with a launch of the likes of Pink in 2000 or Rihanna in 2005, but not a star-making turn on par with what Whitney Houston, Mariah Carey, Britney Spears, Christina Aguilera, Beyonce or Lady Gaga achieved with their debuts. That success came with Like a Virgin, which shifted ever so slightly away from the pure dance pop territory of Madonna toward a more mainstream sound.

It's also the first album where Madonna showed she had some sass, dressing up as an over-sexualized bride on the album's cover, a iconic image captured by Steven Meisel (who would later shoot her 1992 controversial coffee table book, Sex). The title track may have "virgin" in its title, but it's got sex on its mind with Madonna delivering her most kittenish vocal over the memorable hook. It was her first US #1, spending 6 weeks in the top spot. Almost as memorable was the album's second single, "Material Girl," a satirical take on the '80s obsession with equating money and love that, for better or worse, gave the singer a long-lasting nickname.

It's two lesser singles are decent too. Although I used to find the name-dropping fashion-focused "Dress You Up" to be more appealing, these days I'm more into "Angel," which sounds most stuck-in-time of any of this album's singles. It couldn't have come from any other time other than 1984 and I love it for that. Madonna co-wrote the song with Stephen Bray, who would go on to collaborate with her on True Blue, Who's That Girl Soundtrack and Like a Prayer. Among the album cuts, the two closing numbers, "Stay" and "Pretender" are better than the slower songs. I used to really be into "Over and Over," but after 25 years, I'm a little tired of it.

Like a Virgin is Madonna's best-selling album in the US. It was certified diamond for 10 million copies shipped, a feat equaled only by her greatest hits set, The Immaculate Collection. Sure, the Nile Rodgers production is really dated, but for it's time, it was great pop music. A true '80s classic.

Best: Like a Virgin, Material Girl, Angel, Dress You Up, Stay
Posted by Cook In / Dine Out at 3:52 PM

Best of the Decade

Cook In / Dine Out
I started eating in 1977 and, apart from cookies, started cooking in the early '90s. I'm not a professional chef or writer, but I enjoy cooking, eating and writing, so here goes.